More and More Doctors Agree With These Protocols!

Smoking Introduces a Pathogen Into the Lungs

The pathogen begins proliferating resulting in COPD and emphysema... 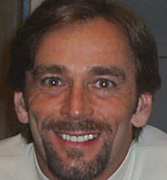 How I Reversed My Mom's Emphysema

My mother was diagnosed with COPD, specifically emphysema, in 2003. No signs of the disease were visible but things began changing for her almost immediately.

She was a strong, proud woman raised by my German grandmother. The COPD diagnosis really depressed her. She told me shortly after finding out, "I can't believe I did this to myself."

I had worked in a hospital many years earlier and remembered seeing the COPD patients come in a few times a year each time looking a bit more disheveled. After a while I didn't see them anymore. I knew they had passed on and it saddened me.

Now it appeared that this nightmare had come to our family!

Within a short time my mother was prescribed a number of drugs. I initially assumed these drugs would either cure this disease or at the very least, stop it in its tracks. After all, it had been more than 30 years since I had worked in that hospital. I thought surely by now they had come up with drugs that would help these patients.

Upon researching the prescribed medications I realized that not one of these very expensive drugs cured or stopped the progress of COPD. In fact, the best any of the drug manufacturers would promise is that their drug 'slowed' the progress of COPD. Not one claimed it would cure COPD or even stop its progress.

I was immediately filled with shock and worry. I was shocked that they did not have any drugs that would actually do anything like cure or stop COPD. I was worried because I realized that unless someone came up with some alternative treatments that would produce miracle results, my mother would not survive emphysema and COPD.

I went to work immediately looking for answers but did not really find anything. I realized that no one had even described the cause of the progression of COPD. That is, no one knew, or would even speculate on, what was causing COPD progression, especially since it was occurring so long after smoking cessagion. (Smoking cessation refers to quitting smoking.)

I think the most valuable part of my research with regards to the cause of the progression of COPD was the constant, all-day observations of my mother. I watched this diseasse continue progressing in the presence of all the prescribed COPD medications and twice weekly Pulmonary Rehab sessions.

Even with all these drugs and Pulmonary Rehab she was still getting worse at an alarming rate. I noticed a viscious cycle she was in with mucus in her lungs. She would take Mucinex when she had excess mucus which would dry up the mucus in her lungs. It seemed like it predisposed her to secondary lung infections often. The Mucinex was apparently just drying up the mucus and leaving the residue in her lungs which was the breeding ground for the lung infections.

Every time she got these infections, the doctor would prescribe antibiotics which would kill her probiotics which make up about 80% of the immune system.

I also noticed that the more supplemental oxygen she required, the smaller her meals became. When I would coax her to eat more she would tell me that if she did she could not breathe.

This was the first evidence I noticed showing the interference of the distending lungs with the stomach. This was the first evidence I saw that, when extrapolated, provided an End Stage scenario where the patient's lungs have distended out so far that they are crowding the stomach severely enough so the patient could no longer eat the minimal amount of food necessary for survival.

This later led to my hypothesis which appears correct since the related treatments begin the reversal of emphysema and the other COPD diseases almost immediately.

My Mother in the Early Stages of Recovery from COPD 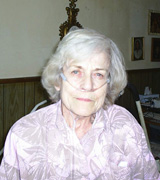 This picture was taken in September 2007. She was diagnosed early in 2003. She did not show signs of the disease for about a year and a half. She had quit smoking upon hearing the diagnosis so this disease was progressing void of any smoking.

The year that followed saw her requiring more and more supplemental oxygen and getting noticeably worse. The prescribed drugs did not do anything other than temporarily mask some symptoms. Each day she was back to square one again with no permanent improvements resulting from all the expensive drugs. It felt like a trap and it did not seem there was any way out. That was a very depressing and frustrating time.

Over the next few years she deteriorated down to End Stage Emphysema. I saw it in her medical record when I requested a copy. She weighed only 77 pounds and required 4 liters of continual supplemental oxygen. She could only sleep for about an hour before waking up in the middle of an exacerbation. She could only eat about a cup of food at a time. When I would encourage her to eat more she would tell me that if she ate any more she could not breathe.

It was at this point that I realized this was the best the medical and pharmaceutical industries have for the COPD patients. They are temporarily masking the symptoms of a progressive disease each day until the disease kills them. This is all they were offering. No hope whatsoever!

It was at this point that I began relying on my observations of my mother and the possibility that an alternative treatment that worked for some other disease may also help COPD patients and provide some useful answers. I first needed an understanding of what was causing the progression of COPD and no one had an explanation of the cause.

My Mother After Her Complete Recovery from COPD

This is my mother at her birthday party in December 2008 after her complete recovery from COPD. Notice there is no longer a cannula in her nose for supplemental oxygen.

You cannot see it because it is out of frame but her portable oxygen tank is laying on the couch in the next room. She no longer needed it yet she carried it around with her for a few months never turning it on once!

I found a cancer researcher at the University of Nevada School of Medicine that had developed a diet that starved pathogens. Dr. Hunter said that cancer was a pathogen and this diet removed its food supply. I was already suspecting that the progression of COPD was the result of a pathogen that was introduced into the lungs through smoking or second-hand smoke.

My mother was in End Stage Emphysema and I did not think she had more than a few months left so out of desperation I put us both on Dr. Hunter's diet.

It took us 10 days to transition to this very restrictive diet. Two weeks later I saw the first signs of improvement in my mother's condition that I had seen since her diagnosis! It was a subtle improvement but it was obvious and permanent!

I was very excited when I saw even this small improvement and then saw that it was there the next day! Just so you know, the small improvement was her walking into the kitchen in the morning for coffee and not gasping for air when she got there.

We built upon these small successes, finding more and more alternative methods that did eventually reverse my mother's COPD completely!

Take a look at the Alternative COPD Treatments page for additional information regarding these alternative treatments and for my hypothesis describing the cause of the progression of COPD. See if it doesn't make more sense than what you have been told.

We pride ourselves in offering the very best products and services available in the industry.